Storyboard - A Guide To 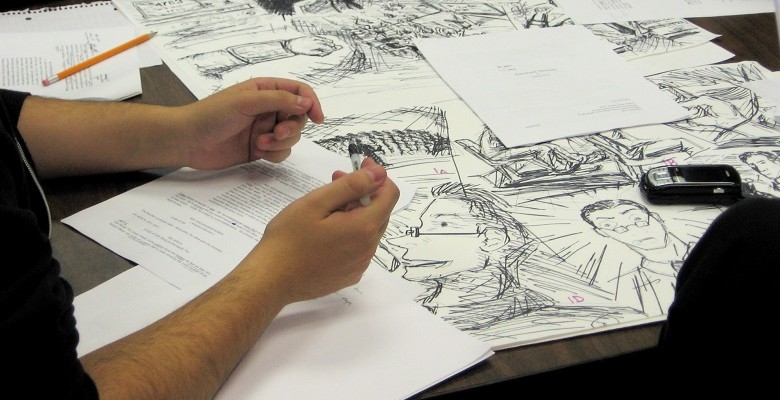 A film storyboard, also known as a shooting board, is essentially a series of frames, with drawings of the sequence of events in a film, similar to a comic book of the film.

In early pre-production, the production's storyboard artist will hand draw each individual frame which are then copied and distributed to the required members of the crew. The single page copied frames are often collated in to storyboard files or books for sequential reference. Storyboards can also be a single page featuring a number of small individual frames.

They assist directors, cinematographers and other crew to visualise the depicted scenes and what will be required for filming that particular scene. Storyboards also help estimate the cost of the overall production in the pre-production stage.

Often storyboards include arrows or instructions that indicate movement. For fast-paced action scenes, monochrome line art might suffice. For slower-paced dramatic films with emphasis on lighting, colour impressionist style art might be necessary.

In creating a motion picture with any degree of fidelity to a script, a storyboard provides a visual layout of events as they are to be seen through the camera lens.  It is the layout and sequence in which the user or viewer sees the content or information. In the storyboarding process, most technical details involved in crafting a film or interactive media project can be efficiently described either in picture or in additional text.

Occasionally a storyboard can be a very interesting visual reference to a planned but ultimately cut or never filmed scene.